Blockchain and the Battle Against Corruption & Fraud 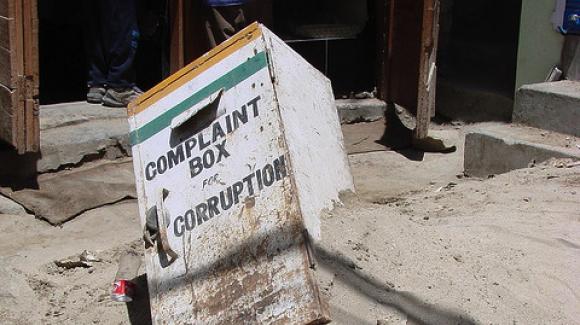 Corruption, embezzlement, fraud, these are all characteristics which exist everywhere. It is regrettably the way human nature functions, whether we like it or not. What successful economies do is keep it to a minimum. No one has ever eliminated any of that stuff.”

-Alan Greenspan, former Chairman of the Federal Reserve of the United States.

For the first time in history, we may actually have a viable solution to rampant political and economic corruption in the world.

Blockchain not only provides a technical solution to many of the world’s multifaceted problems, it activates a powerful, but relatively dormant, community of social innovators.

Countless industries from supply chain management to art proprietorship are expected to receive a back-end rewiring in the quest to eliminate inefficiency and increase transparency and decentralization.

When it comes to politics and systematic corruption, however, things aren’t as simple as replacing humans with math. It’s deeper than deposing corrupt political leaders and replacing them with more favorable leaders with an equal human propensity for corruption.  It’s more complicated than coming up with a “plug-and-play” universal blockchain solution that crypto-terians salivate over. The mission is to sift through the sociopolitical cat litter and identify the problem variables that can be improved with blockchain and cryptocurrency for good.

Join us on an adventure to explore how blockchain and cryptocurrency can fight global corruption with insights from experts working on blockchain-based projects that focus on financial privacy, commercial data, and inflation. We’ve got Rob Viglione of ZenCash, Yoni Cohen of Novo Protocol, and Eiland Grover of Kowala.

A Global Solution to a Global Problem

The total cost of corruption around the world amounts to four to five percent of global GDP, nearly $2.6 trillion USD, according to the WorldEconomicForum. To put that into perspective, that’s like the entire annual nominal GDP of the United Kingdom, the world’s fifth largest economy, completely lost to the underworld of bribes and shady negotiations.

Countries in desperate need of economic growth such as Kenya are the greatest victims of internal corruption, as Kenya regularly loses a third (nearly $6 billion) of its state budget to corruption every year.

A significant amount of global corruption happens out of the immediate purview of government leaders, but what happens when the leadership itself is corrupt? There is no lack of examples to choose from.

For a contemporary example, look at Venezuela, the world’s most dangerous country two years running.  As the Maduro government reigns on, politicians on every level are finding themselves increasingly divorced from a starved population, 90% of which is living in poverty. Some Venezuelans are turning to alternatives such as cryptocurrency mining, as well as even killing dragons on Runescape to sell their loot/gold for USD to combat a minimum wage equal to about $47 USD per month and inflation approaching 13,000 percent in 2018.

“Venezuela’s currency has lost 99.99% of its value in the last 5 years. And yet Maduro’s regime was just re-elected. Why?

Hyperinflation occurs when a government cannot tax or borrow the money needed to cover its expenses. Instead, it prints money, leading to devaluation of the currency and steeply rising prices. Savings are wiped out, and people rush to put money into hard assets and stable foreign currency. Outside investment into the country halts, the tax base is eroded further, and the death spiral continues. Who profits? The people who get the newly printed money first.

Ironically, hyperinflation can, in the short run, strengthen an autocracy by weakening the entire populace, causing the emigration of qualified political challengers, and enriching the autocrat’s coterie. This is the current story in Venezuela.

Nevertheless, hyperinflation must end, and the most peaceful way to bring this about is through a “dollarization” of the economy. Ecuador, for example, stemmed its own inflationary spiral by officially adopting the U.S. Dollar as its national currency following the economic crisis of 1999.”

With the country in collapse, Maduro devoted much of his time to an ironic “anti-corruption” spree and installing loyalists in their places. In May 2018, Maduro won another six years in power with 68% of the votes on a voter turnout of about 46.1%(down from 80% in 2013).

The Blockchain is Mightier than the Sword

Blockchain can be applied to a variety of use cases that tackle corruption on a global scale.

Immediate applications arise from the immutable (unable to be changed by anyone, even those in power), transparent (each block can be checked down to the genesis block), and efficient (less juggling of procedures between rapidly changing regimes) nature of blockchain technology.

These three features alone give rise to an ability to sanitize dirty transactions and voting procedures and weed out corrupt middle-man third parties.

The following commentaries come from experts working on different blockchain-based solutions that could play a substantial role in eradicating corruption.

How can blockchain and cryptocurrency provide financial freedom to citizens living under corrupt regimes?

A core component of the cryptocurrency ethos is bringing “power to the people”. The ability to carry and maintain an entire digital currency falls on a network of people all over the world, and no single central entity can shut it down.

The entire Bitcoin blockchain is about 161 GB, just a little above half of a modern iPhone’s storage. However, this file contains the history of every single transaction ever made using bitcoin including the addresses involved.

The same aspects that give blockchain its edge can be applied in a variety of ways to protect citizens living under corrupt regimes.

“Blockchain based identity providers, corporate registries, and credit networks will enable businesses and individuals to access capital and global markets without exposing their private information to corrupt or heavy-handed governments.

Cryptocurrencies can be used as a store of value as well as a means of transacting, which are especially useful to those living under corrupt regimes or in countries with an unstable national fiat.”

For citizens living in nations undergoing economic collapse, anchoring their livelihood into a rapidly inflating currency can be catastrophic. Citizens not only end up struggling to pay for daily expenses, they have to face highly disfavorable exchange rates should they choose to move to another country (if they’re lucky enough to have that option).

“The most obvious safeguard cryptocurrencies offer is immediate diversification from your local monetary system. When you’re in a failing economy with a collapsing currency, any alternative to get out is a good one.”

Are corrupt regimes capable of shutting down cryptocurrencies in their country, or access to them? Why or why not?

Power is a tough drug to kick.

People work their entire lives for the ability to influence the world, and very few are willing to give it up for the sake of integrity. Deposed dictators also don’t tend to experience pleasant fates after losing control. Any threats to power usually get swiftly and forcefully dealt with.

It’s fairly easy for a government with a firm grip on a country and its military to snipe out any “traitors of the people.” However, blockchain is different. There isn’t a central political agitator to assassinate, but a decentralized network of computers and nodes all over the world.

So, are blockchain solutions actually immune from regulatory and military pressure?

“Cryptocurrencies can’t be shut down, however, users can be persecuted. This is a point I think is under-appreciated in both our industry and in governments. Industry enthusiasts like to point out that it’s impossible to shut down a distributed network and therefore our products are censorship resistant, while governments tend to be overconfident in their regulatory authority. The reality is, human suffering isn’t something we should callously brush over.”

“Only to a limited extent. Governments can work with ISPs to limit access and utility of virtual currencies within a given locale, however, the nature of decentralization makes it particularly difficult to completely shut down access.”

Regimes will have difficulty shutting down cryptocurrencies due to the decentralized nature of the blockchain. Nevertheless, governments will work hard to avoid losing their firm grip over the economy.

We can look to government responses to the internet and social media to understand how things may play out with cryptocurrency. These technologies freed information and helped citizens organize some successful regime-toppling protests as demonstrated during the Arab Spring. On the other hand, China, with its “Great Firewall,” has shown that it is possible for a country to exert significant control over the internet and social media.

Governments will also have to grapple with the fact that cryptocurrency and blockchain can also enable criminal and terrorist activity. Cryptocurrency projects like ours focused on increasing human freedom must create effective disincentives to prevent abuse of decentralized networks by bad actors, official or unofficial.”

How can your project provide relief/support to citizens in need?

The hallmark of an effective solution isn’t ideation, it’s implementation.

Over-hyped whitepapers aren’t going to put food on the table, nor keep oppressed peoples from under the thumb of corrupt leadership.

While blockchain’s implementation in solutions that could potentially eradicate or combat corruption is still embryonic, there are several projects that are developing and testing significant solutions.

“Designing quality products that empower individuals is the first step and layering strong security and a bit of privacy into them goes a long way. Our entire network is designed to protect users and make sure their private data isn’t leaked to adversaries, which can be hackers or even repressive regimes violating human rights. Going beyond the tech, we can, and absolutely should, come together as a community to speak out against repression and unnecessary suffering.” “Novo enables businesses to circumvent poorly-functioning governments, credit bureaus that do not serve them well, and the local corruption by proving to global markets that they have the credibility and creditworthiness to be trusted as customers, suppliers and borrowers in the global marketplace.”

While corruption can have disastrous effects on civilian populations in third world countries, it still poses a substantial problem for healthy economies as well. To name a few notable examples in American history:

Circling back to the words of wisdom a la Greenspan, “what successful economies do is keep [corruption, embezzlement, fraud] to a minimum.”

“Corruption” is nothing more than a betrayal of power, judged by a generally agreed upon set of standards. Betrayal happens in the dark or through a veil of orchestrated smokescreens. A country’s economy doesn’t necessarily determine the amount of corruption, but it does usually determine how detrimental the effects are for an already impoverished population.

Blockchain, minus all the buzzwordy clamor, is fundamentally a technology that maximizes transparency and efficiency – two of the main ingredients that tend to disappear from corrupt regimes.

Whether democracy or authoritarian, corruption exists.

Which can be read on Amazon Kindle Unlimited for Free  You can find more interesting articles by visiting us on one of the following platforms: AML Knowledge Centre (LinkedIn) orAnti-Bribery and Compliance at the Front-Lines (LinkedIn)