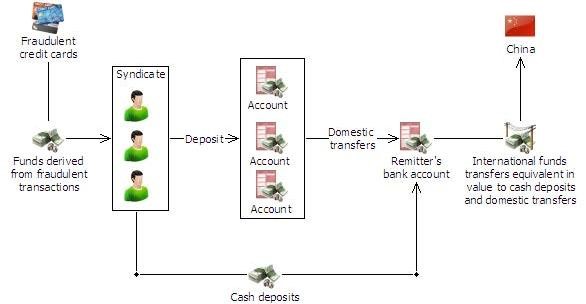 A suspicious matter report (SMR) was the catalyst for a law enforcement operation which resulted in the arrest of three foreign nationals. The operation revealed a multi-million dollar money laundering syndicate which was laundering illicit proceeds derived from producing fraudulent credit cards.

As a result of the SMR referral authorities seized more than 10,000 fake credit cards, which they believed had the potential to fund AUD25 million worth of fraudulent transactions.

The initial SMR related to the main suspect making an outgoing international funds transfer instruction (IFTI) to China, funded with AUD500,000 in cash from an unknown source. Two foreign nationals were also recruited by the main suspect to conduct similar financial transactions for the syndicate.

The lodgement of the SMR triggered AUSTRAC’s automated monitoring systems and initiated enquiries by AUSTRAC of related financial transactions. The enquiries revealed that the syndicate used remitters who primarily sent funds to Chinese beneficiaries and also identified other high-value transactions made by the main suspect. The other transactions included cash deposits of values more than AUD10,000 that was reported to AUSTRAC via threshold transaction reports (TTRs).

A further seven SMRs were submitted to AUSTRAC from reporting entities over the next four months, detailing further transactions worth AUD2 million, including cash deposits and IFTIs.

The SMRs identified that the syndicate was:

AUSTRAC assisted authorities with further searches on related financial transaction reports and found that the syndicate had, over this same four-month period, deposited more than AUD5 million in cash and conducted AUD6.5 million worth of outgoing international funds transfers to China and Hong Kong.

Two of the syndicate members pleaded guilty to dealing with cash reasonably suspected of being the proceeds of crime and were sentenced to seven months and 12 months imprisonment. The main suspect was charged with offences relating to the manufacture of counterfeit credit cards, possessing proceeds of crime, money laundering offences and having a false passport. The suspect was sentenced to a maximum of five years and nine months.

This article is the copyrighted work of AUSTRAC. You may download, display, print and reproduce this material in unaltered form only (retaining this notice) for your personal, non-commercial use or use within your organisation. Where material has been sourced from other third-party sources, copyright continues.