The Sandbox where Innovation and Regulation can Play without Anyone Getting Hurt. 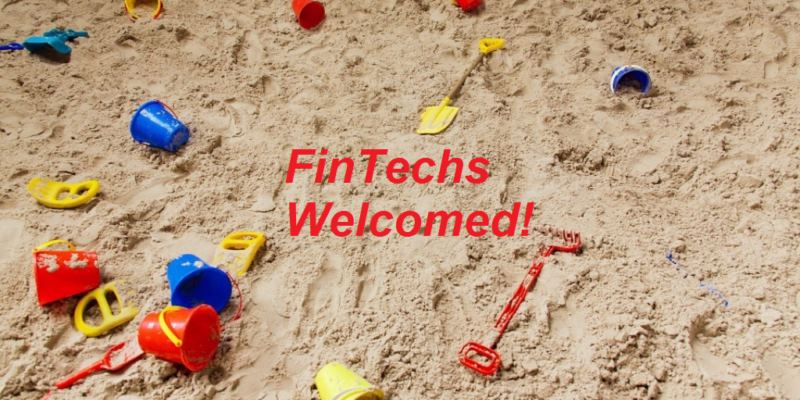 The internet has opened the door to purchase anything, I do mean anything, from any part of the world. These items can be paid for instantly through electronic payments. These transfers can be made from everywhere with ease and speed allowing greater anonymity if desired.

It’s also safe to say that Financial Technology has lagged many other industries in their overall adaptation of technological innovation. This sudden surge in FinTechs while not all are revolutionary business models they all seem to have a common denominator and that is to take advantage of the high operating costs and significant decline in the social reputation of banks.

At a time when many financial institutions are trying to become more efficient, lower cost and improve customer relationships.

Innovation has never been a bad thing and it keeps economies competitive and industries efficient. There is no reason to believe that FinTechs won’t have a positive effect on the banking industry. But as banks surrender more and more of their business too hungry entrepreneurs’ AML regulators will find themselves at crossroads on important decisions.

“Assessing past situations, there have been many lessons learned from which can be seen as a driving force behind the regulator Sandbox”

By far a regulator’s most important task is making sure that the financial system is not being improperly used for money laundering or terrorist financing.  While at the same time ensuring that AML regulation doesn’t hamper innovation, disrupt competition but also acting as an interface making sure that these new business models are understood by all relevant legal authorities.

For example, in a recently highlighted case involving a Bitcoin trader, felony charges against Michell Espinoza for engaging in a money service business and money laundering were thrown out by Judge Pooler. She noted that while “the court is not an expert in economics; however, it is very clear, even to someone with limited knowledge in the area, the Bitcoin has a long way to go before it is the equivalent of money. She also made the point, “this court is unwilling to punish a man for selling his property to another when his actions fall under a statute that is so vaguely written that even legal professionals have difficulty finding a singular meaning.”

The take away from Judge Pooler’s statements are that relevant legal authorities clearly don’t have enough knowledge on Bitcoin or business models surrounding Bitcoin, nor how it might be exploited by criminals.

Let’s take a step back to look at the bigger picture. The truth is that all banks, are under enormous pressure to minimize their exposure to money laundering and stop terrorist financing. It’s no secret that this is driven by the attitude of the US lawmakers and regulators.

Look at the impact AML regulation has had on correspondent banking relationships, as a majority of trade financing is done in US currency.  This in itself creates enormous challenges for banks not accustomed to US AML Laws. For those institutions that are experienced in US AML laws, they either spend time and money to conduct enhanced due diligence on the local bank ensuring that its anti-money laundering policies will hold up against US AML regulation or rethink their strategy. Therefore, if a bank has a limited number of transactions, and has to invest $15,000 – $50,000 to achieve adequate due diligence on a single client, it can reduce the appeal of working in a particular country.

In a similar manner, both the Remittance industry and the banking industry have had a pugnacious relationship as banks systematically terminated the accounts of money transfer services to avoid the risk of heavy money laundering fines.  Causing legitimate firms to go out of business, leaving migrants workers with no safe way to send money home or less competition which will negatively impact the already high transfer fees.

“The Fintech Industry today and how the Regulator Sandbox is helping”

The total global investment from 2010 to 2015 reached about $50B. The geographies which have received the largest amount of investments in this time frame has been the US with about $32B, $5B across EMEA and Asia with $4B.

The largest area of investment is in payment processing and lending solutions (40 percent), however emerging technology such as the P2P blockchain popularized by Bitcoin and cloud-based technologies that add speed and security to financial networks are also strongly supported.

The 2015 EY FinTech adoption Index survey found that 15.5% of digitally active consumers have used at least two FinTech products within the last six months. As awareness of the available products and services increases, adoption rates could double within the year.

Given the fact, that the Fintech industry is growing faster than expected, which could mean greater opportunities, it should be as no surprise that many local governments and banks themselves want to leverage these opportunities.

“Ms. Jacqueline Loh, Deputy Managing Director of the Monetary Authority of Singapore, said, “MAS aims to provide a responsive and forward-looking regulatory approach that will enable promising FinTech innovations to develop and flourish. The sandbox will help reduce regulatory friction and provide a safer environment for FinTech experiments. We believe this will give innovations a better chance to take root.”

Not only do these regulatory sandboxes aim to provide a safe space for FinTechs, but as we seen with Bitcoin, innovation moves faster than regulators can adapt the rules, the sandbox gives regulators the opportunity to assess new innovation, market trends, and how these innovations might be exploited by criminals, before extending use to a broader market.

The end game for financial criminal activity is the placement their ill-gotten gains into legitimate banking organizations without raising an alarm. Once accomplished they are ultimately able to turn illegal assets into legal ones. Allowing the most ruthless criminals, to join society as legitimate business people and role models.

Striking the right balance between promoting innovation, protecting consumers and preventing financial crime requires collaboration with industry, it looks like regulation has learned from past lessons and is getting it right this time.