Money laundering in Russia and what we know! 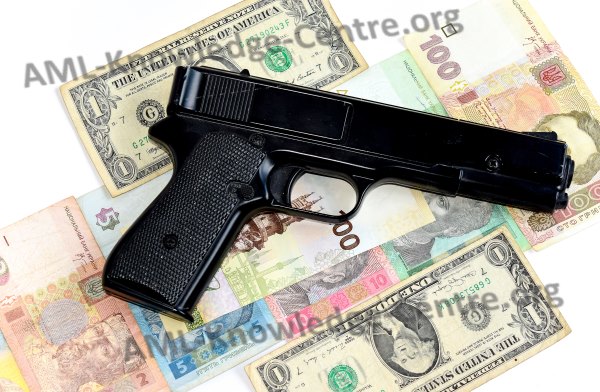 Money laundering in Russia has its own characteristics. In the normal world money laundering is the transformation of “illicit money” into “clean money”: criminals selling drugs to invest in real estate, in Russia it is different. There money laundering mostly means turning “clean money” into “illicit money”, for example, by evading taxes or using illegal schemes to withdraw money from the country that could be both illicit and clean. Сompanies trying to transfer legal money abroad because investing in Russia is too dangerous: high political risks, weak legal infrastructure, criminalization and corruption of the economy. To withdraw money from the country companies need an approval from the Central Bank and an economic purpose like a financial or commercial transaction. Along with the money earned in Russia by legal means, there are also sources of illegally earned money:

Where the illegal money comes from?

Sources of legal funds in Russia can be divided into 4 major categories:
GAFI experts note that foreign sources of illegal funds entering Russia and the countries of the former USSR for laundering are little known.

How does the money laundering work in Russia?

The most common method of money laundering in Russia is the opening of individual accounts at financial institutions, placing there significant amounts in cash and then transferring them to the accounts of fake companies, which in turn transfer them to another location.
Other methods include the use of counterfeit accounts, double bookkeeping and contract fraud. A typical scenario involves the transfer of funds in foreign currency to the account of a fake company overseas, allegedly for the purpose of financing a commercial transaction. A false contract for the purchase of goods from a shell company is submitted to the bank as evidence of the commercial need for transfer of funds. Once the money is transferred, legalized funds can be freely transferred to another account or converted into cash. This method is also used to steal public funds.

To launder proceeds from illegal activities in the region, banks, exchange offices, non-bank financial institutions, casinos and real estate companies are also used. Most of the laundering operations are carried out using cash or wire transfers, as well as bank and traveler’s checks.

According to documents received by the international organization of investigative journalists OCCRP, for three years from Russia was withdrawn at least $ 20 billion, but the real amount can be $ 80 billion. Journalists believe that about 500 people were involved in the corruption scheme named Global Laundry, including oligarchs, bankers and individuals.

Money laundering usually took place according to the following scheme: participants registered, for example, in the UK, two fake companies, the real owners of which were hiding behind a chain of off-shores. The authors of the investigation assume that both enterprises actually had the same owners. Then both companies signed a loan agreement, according to which company “A” lends a large sum from company “B”. In reality, the deal was fictitious, and no money was given to company “A”.

The contract stipulated that commercial structures from Russia would act as guarantors of repayment of the loan, which in almost all cases was headed by a Moldovan citizen. The company “A” then declared itself insolvent, and obligations to repay the debt automatically passed to Russian companies.

As the Moldovan citizen was at the head of Russian companies, the lawsuits had to be considered in the Moldovan court. Corrupt judges confirmed the existence of the debt and issued an order to recover from the guarantors the required amount. According to the investigation, more than 20 Moldovan judges were involved in the scheme. Some of them are under investigation now, and the others have resigned.

After the court decision, the bailiffs, who were also involved in the scheme, opened accounts with Moldindconbank in Moldova. To these accounts, Russian companies had to transfer money, thus closing a fictitious debt.

n the end, the money was transferred to the account of the “creditor company”, for the opening of which the Latvian bank Trasta Komercbanka was always selected. Thus, the money legalized by the Moldovan court was on the territory of the EU: swindlers could now dispose of the money at their discretion and transfer them to accounts in other countries.

Criminal groups continue to make significant investments in real estate, hotels, restaurants and other businesses in some countries of Western Europe. Funds for these purposes often come through intermediary offshore companies. The establishment of links between organized Russian and foreign criminal gangs is noted.
In Russia today there are objective economic conditions for the active legalization of criminal capital. Illicit drug trafficking, the trade in arms and radioactive materials, prostitution, underground gambling, organized crime, illegal financial and banking activities, the plundering of public funds and funds, license-free video business, illegal use of copyright and trademark rights, illegal production of alcohol are all more than favorable conditions for the emergence of significant by the standards of even Western states of illegal capital.
The presence of such money in the country is recognized by the international community as a sufficient condition for large-scale criminal financial operations.
The situation is aggravated by the fact that a huge part of the economic turnover in Russia is served by cash. According to some estimates, “cash” provides up to 60 per cent of the economic turnover (compared to 20 – in the US, or 40 – in Germany). Cash turnover significantly reduces the possibility of introducing effective reporting by financial and other institutions (casinos, salons for the sale of expensive cars, etc.) for transactions with a certain “ceiling”.
In addition to objective circumstances (the “shadow” economic foundation) is not enough to carry out large-scale laundering operations. It is necessary to have well-developed connections with the main financial centres of the world: London, New York, Tokyo, Zurich, Frankfurt am Main, etc.
The facts show: such links are established and expanded by Russian criminals. Active counter-movement of money began. Simplified departure from Russia – there was a legal possibility of investing money in the foreign real estate, securities, luxury goods. Such operations are carried out even during tourist trips to foreign financial centres and “tax havens”.
On the other hand, Russia is rapidly becoming the sphere of application of foreign criminal capital. For example, the Association of Russian Banks believes that over the past two years about 16 billion dollars of Mafia capital have migrated to Russia. The “dollarization” of the domestic economy is growing, and according to various estimates, there are 12 billion of US dollars circulating in Russia in 2018. The currency in the country has long been freely convertible in thousands of exchange offices.
More than 3 thousand criminal groups specialize in the legalization of criminal proceeds, almost 1.5 thousand of these groups formed their own legal economic organizations for this purpose. Up to 80% of the economic facilities of the non-state sector of the economy are under the control of criminal communities that charge them, including more than 500 banks, about 50 exchanges, almost the entire wholesale and retail trade network. According to expert estimates, 2/3 of the legalized funds received in this way are invested in the development of criminal entrepreneurship, 1/5 of it is spent on the acquisition of real estate.
A characteristic feature of money laundering technologies in Russia is the illegal cashing out of funds in order to conceal traces of origin and subsequent involvement in illegal or legal economic circulation.